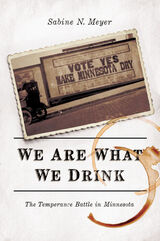 Sabine N. Meyer eschews the generalities of other temperance histories to provide a close-grained story about the connections between alcohol consumption and identity in the upper Midwest.

Meyer examines the ever-shifting ways that ethnicity, gender, class, religion, and place interacted with each other during the long temperance battle in Minnesota. Her deconstruction of Irish and German ethnic positioning with respect to temperance activism provides a rare interethnic history of the movement. At the same time, she shows how women engaged in temperance work as a way to form public identities and reforges the largely neglected, yet vital link between female temperance and suffrage activism. Relatedly, Meyer reflects on the continuities and changes between how the movement functioned to construct identity in the heartland versus the movement's more often studied roles in the East. She also gives a nuanced portrait of the culture clash between a comparatively reform-minded Minneapolis and dynamic anti-temperance forces in whiskey-soaked St. Paul--forces supported by government, community, and business institutions heavily invested in keeping the city wet.
AUTHOR BIOGRAPHY
Sabine N. Meyer is an assistant professor of American studies at the Institute of English and American Studies at the University of Osnabrück.
TABLE OF CONTENTS
Cover
Title
Copyright
Contents
Acknowledgments
Abbreviations
Introduction
1. “Westward the Jug of Empire”: The Emergence of a Temperance Movement in Minnesota (1819–1865)
2. Organizing into Blocs: The Fight for or against Personal Liberty (1866–1887)
3. “Talking against a Stonewall”: The High License Consensus (1888–1897)
4. “Putting on the Lid”: The Anti-Saloon League and Its Impact on the Dry Movement (1898–1915)
5. Equating Temperance with Patriotism: The Great War and the Liquor Question (1916–1919)
Conclusion
Notes
Bibliography
Index