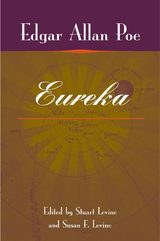 Eureka
by Susan Levine and Susan F. Levine
University of Illinois Press, 2004
Cloth: 978-0-252-02849-6
Originally published in 1848, Eureka is Poe's book on how the universe was formed, how it functions, and what its future might be. Poe provides a physical, scientific explanation for the interconnectedness of all things--an idea at the heart of much of nineteenth-century romanticism and American Transcendentalism in particular.

This user-friendly edition puts Eureka in context, explaining Poe's excellent grasp of then-new developments in astronomy, his often-prescient projections from what was known to what might come next (Poe is especially good on space-time), and the close connections between Eureka and the thought and attitudes of his era.

Through extensive annotations this edition of Eureka demonstrates intimate connections with Poe's poetry, fiction, and criticism, with his career and aspirations, his humor and satire, and his love of grand literary effects.

It also presents a carefully edited text, including Poe's own emendations from several copies which he marked for the revised reprinting that he hoped would follow, and related documents
AUTHOR BIOGRAPHY
Stuart Levine was a professor emeritus of English at the University of Kansas. His many books include Edgar Poe: Seer and Craftsman. Susan Levine was an assistant dean of the Graduate College at the University of Kansas and coeditor of The Collected Writings of Edgar Allan Poe, Eureka, and other works.