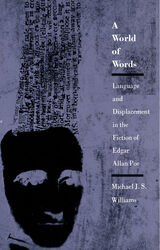 A World of Words offers a new look at the degree to which language itself is a topic of Poe's texts. Stressing the ways his fiction reflects on the nature of its own signifying practices, Williams sheds new light on such issues as Poe's characterization of the relationship between author and reader as a struggle for authority, on his awareness of the displacement of an &quot;authorial writing self&quot; by a &quot;self as it is written,&quot; and on his debunking of the redemptive properties of the romantic symbol.
TABLE OF CONTENTS