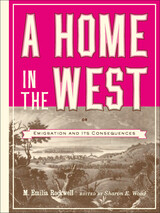 This is the first novel published in Iowa. Printed in Dubuque in 1858, it was written to recruit emigrants to Iowa; what makes it unique among emigration literature is the fact that it was directed at women, using the form of a domestic novel loaded with gentle mothers and stalwart fathers, flower-gemmed prairies and vine-draped cottages, and lots of tender words and humble weddings to encourage women to settle in the new state.
Mary Emilia Rockwell tells the story of Walter and Annie Judson, who one desperate March night decide to move to the West in search of a better life. Walter is an exploited, debt-ridden carpenter who knows that “if we could go to the West, to one of those new States where work is plenty, wages high and land cheap, we could make a more comfortable living, and besides soon have a home of our own.” Annie has “all a woman’s devotion and self-denial”; loving and supportive, she takes the path of duty and moves her little family to “a pleasant little village in Iowa.” In Newburg, everyone is newly arrived, hard-working, and self-sacrificing, facing difficulties with the certainty of prosperity and independence to come. In spite of dramatic setbacks, Walter prospers, and he and Annie build a “beautiful and commodious” house in the growing community of Hastings. The book ends with a return visit to Connecticut, where the Judsons and a series of surprising events persuade Annie’s parents to move to Iowa too, and everyone is reunited in their home in the West.
Teacher, administrator, and writer Emilia Rockwell (born about 1835, died about 1915) writes a conventionally sentimental story. However, she actually divorced her first husband, became the administrator of a juvenile reformatory in Milwaukee, and married a second time; she lived in Lansing, Iowa, for only a few years. Her writing is romantic, but she accurately portrays the economic challenges and transformations of this pioneer period and, historically, touches upon the Panic of 1857, the Mormon Handcart Expedition, and Native Americans in Iowa. Sharon Wood’s illuminating introduction presents Rockwell's biography and places the novel in its historical and literary contexts, including such events as the Spirit Lake massacre and the Dred Scott decision. A Home in the West is a satisfying read and an intriguing combination of boosterism and literature
AUTHOR BIOGRAPHY
Sharon Wood is an associate professor of history at the University of Nebraska-Omaha and author of The Freedom of the Streets: Work, Sexuality and Citizenship in a Gilded Age City.
REVIEWS

"The dream that lured people westward, a woman's point of view, and the reasons that extended kin often followed, all in one charming and revealing volume."--Glenda Riley, Alexander M. Bracken Professor Emeritus, Ball State University

"Unique. The promise of Iowa on the eve of the Civil War, through the eyes of a young wife and mother. Sharon Wood's fine detective work introduces Iowa?s first novel and Iowa's first novelist."--Linda K. Kerber, May Brodbeck Professor in the Liberal Arts and Sciences, University of Iowa