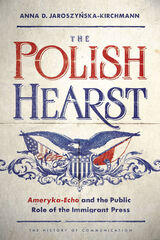 Arriving in the U.S. in 1883, Antoni A. Paryski climbed from typesetter to newspaper publisher in Toledo, Ohio. His weekly Ameryka-Echo became a defining publication in the international Polish diaspora and its much-read letters section a public sphere for immigrants to come together as a community to discuss issues in their own language.

Anna D. Jaroszyńska-Kirchmann mines seven decades' worth of thoughts expressed by Ameryka-Echo readers to chronicle the ethnic press's role in the immigrant experience. Open and unedited debate harkened back to homegrown journalistic traditions, and Jaroszyńska-Kirchmann opens up the nuances of an editorial philosophy that cultivated readers as content creators. As she shows, ethnic publications in the process forged immigrant social networks and pushed notions of education and self-improvement throughout Polonia. Paryski, meanwhile, built a publishing empire that earned him the nickname ""The Polish Hearst.""

Detailed and incisive, The Polish Hearst opens the door on the long-overlooked world of ethnic publishing and the amazing life of one of its towering figures.


“The Polish Hearst tells a compelling story that fills a void in the record of Antoni Paryski's contributions to the history of America's immigrant newspapers and augments the historiography of the American media to account for the contributions of the professional journalists and the readers-writers of the ethnic press as well."--Ohio Valley History

TABLE OF CONTENTS
Cover
Title Page
Contents
Acknowledgments
Introduction
1. Antoni A. Paryski
2. The Price of Independence
3. The Business of Ameryka-Echo
4. Ameryka-Echo in Changing Times
5. Oswiata and Ameryka-Echo
6. Letter-Writing Communities in the Polish American Press
7. The Corner for Everybody
8. Private Letters in the Public Sphere
Epilogue
Notes
Bibliography
Index