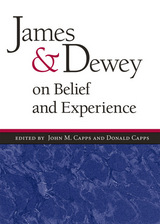 Donald Capps and John Capps's James and Dewey on Belief and Experience juxtaposes the key writings of two philosophical superstars. As fathers of Pragmatism, America's unique contribution to world philosophy, their work has been enormously influential, and remains essential to any understanding of American intellectual history.

In these essays, you'll find William James deeply embroiled in debates between religion and science. Combining philosophical charity with logical clarity, he defended the validity of religious experience against crass forms of scientism. Dewey identified the myriad ways in which supernatural concerns distract religious adherents from pressing social concerns, and sought to reconcile the tensions inherent in science's dual embrace of common sense and the aesthetic.

James and Dewey on Belief and Experience is divided into two sections: the former showcases James, the latter is devoted to Dewey. Two transitional passages in which each reflects on the work of the other bridge these two main segments. Together, the sections offer a unique perspective on the philosophers' complex relationship of influence and interdependence. An editors' introduction provides biographical information about both men, an overview of their respective philosophical orientations, a discussion of the editorial process, and a brief commentary on each of the selections.

Comparing what these foremost pragmatists wrote on both themes illumines their common convictions regarding the nature of philosophical inquiry and simultaneously reveals what made each a distinctive thinker.
AUTHOR BIOGRAPHY
John Capps is an assistant professor of philosophy at Rochester Institute of Technology. Donald Capps is William Harte Felmeth Professor of Pastoral Theology at Princeton Theological Seminary and author of several books including Men, Religion and Melancholia: James, Otto, Jung and Erikson.
TABLE OF CONTENTS