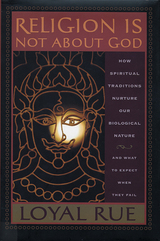 Thousands of religious traditions have appeared over the course of human history but only a relative few have survived. Some speak of a myriad of gods, others of only one, and some recognize no gods at all. Volumes have been written attempting to prove the existence or nonexistence of supernatural being(s). So, if religion is not about God, then what is it about?

In this provocative book, Loyal Rue contends that religion, very basically, is about us. Successful religions are narrative (myth) traditions that influence human nature so that we might think, feel, and act in ways that are good for us, both individually and collectively. Through the use of images, symbols, and rituals, religion promotes reproductive fitness and survival through the facilitation of harmonious social relations. Drawing on examples from the major traditions—Judaism, Christianity, Islam, Hinduism, and Buddhism—Rue shows how each religion, in its own way, has guided human behavior to advance the twin goals of personal fulfillment and social coherence.

As all faiths are increasingly faced with a crisis of intellectual plausibility and moral relevance, this book presents a compelling and positive view of the centrality and meaning of religion.

AUTHOR BIOGRAPHY
Loyal Rue, two-time Templeton Award winner, is a professor of philosophy and religion at Luther College in Decorah, Iowa.
REVIEWS
Loyal Rue has written a bold, scholarly, and gracefully composed discussion of the complex realtions between the concepts of God and religion. I learned a great deal from the rich tapestry of facts that filled the gaps in my understanding of the history of these ideas and believe that readers will enjoy a similar intellectual experience.
— Jerome Kagan, research Professor of Psychology, Harvard University