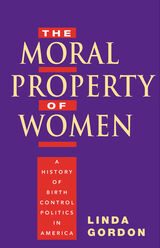 Choice Magazine's Outstanding Academic Books for 2004The only book to cover the entire history of birth control and the intense controversies about reproduction rights that have raged in the United States for more than 150 years, The Moral Property of Women is a thoroughly updated and revised version of the award-winning historian Linda Gordon's classic history Woman's Body, Woman's Right, originally published in 1976.Arguing that reproduction control has always been central to women's status, The Moral Property of Women shows how opposition to it has long been part of the conservative opposition to gender equality. From its roots in folk medicine and in a campaign so broad it constituted a grassroots social movement at some points in history, to its legitimization through public policy, the widespread acceptance of birth control has involved a major reorientation of sexual values.

Gordon puts today's reproduction control controversies--foreign aid for family planning, the abortion debates, teenage pregnancy and childbearing, stem-cell research--into historical perspective and shows how the campaign to legalize abortion is part of a 150-year-old struggle over reproductive rights, a struggle that has followed a circuitous path. Beginning with the "folk medicine" of birth control, Gordon discusses how the backlash against the first women's rights movement of the 1800s prohibited both abortion and contraception about 130 years ago. She traces the campaign for legal reproduction control from the 1870s to the present and argues that attitudes toward birth control have been inseparable from family values, especially standards about sexuality and gender equality.

AUTHOR BIOGRAPHY
Linda Gordon, a professor of history at New York University, is the author of numerous books, including Pitied but Not Entitled: Single Mothers and the History of Welfare, 1890-1935, and The Great Arizona Orphan Abduction, which won the Bancroft Prize and the Beveridge Prize.
REVIEWS
Honorable Mention, John Cawelti Book Award, American Culture Association, 2002.
A Choice Outstanding Academic Title, 2004.
— American Culture Association