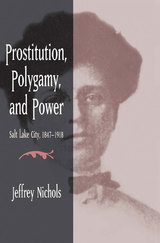 After the transcontinental railroad opened Utah to large-scale emigration and market capitalism, hundreds of women in Salt Lake City began to sell sex for a living, and a few earned small fortunes. Businessmen and politicians developed a financial stake in prostitution, which was regulated by both Mormon and gentile officials. In this book, Jeffrey Nichols examines how prostitution became a focal point in the moral contest between Mormons and gentiles and aided in the construction of gender systems, moral standards, and the city's physical and economic landscapes.
AUTHOR BIOGRAPHY
Jeffrey Nichols is an associate professor of history at Westminster College in Salt Lake City.
TABLE OF CONTENTS