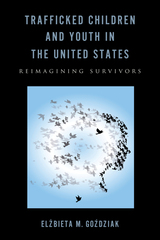 Trafficked children are portrayed by the media—and even by child welfare specialists—as hapless victims who are forced to migrate from a poor country to the United States, where they serve as sex slaves. But as Elzbieta M. Gozdziak reveals in Trafficked Children in the United States, the picture is far more complex.
Basing her observations on research with 140 children, most of them girls, from countries all over the globe, Gozdziak debunks many myths and uncovers the realities of the captivity, rescue, and rehabilitation of trafficked children. She shows, for instance, that none of the girls and boys portrayed in this book were kidnapped or physically forced to accompany their traffickers. In many instances, parents, or smugglers paid by family members, brought the girls to the U.S. Without exception, the girls and boys in this study believed they were coming to the States to find employment and in some cases educational opportunities.
Following them from the time they were trafficked to their years as young adults, Gozdziak gives the children a voice so they can offer their own perspective on rebuilding their lives—getting jobs, learning English, developing friendships, and finding love. Gozdziak looks too at how the children’s perspectives compare to the ideas of child welfare programs, noting that the children focus on survival techniques while the institutions focus, not helpfully, on vulnerability and pathology. Gozdziak concludes that the services provided by institutions are in effect a one-size-fits-all, trauma-based model, one that ignores the diversity of experience among trafficked children.
Breaking new ground, Trafficked Children in the United States offers a fresh take on what matters most to these young people as they rebuild their lives in America.
AUTHOR BIOGRAPHY
ELZBIETA M. GOZDZIAK is the professor of research at the Institute for the Study of International Migration at Georgetown University in Washington, D.C. She was formerly the editor of the journal International Migration and is co-editor of three books including Children and Migration: At the Crossroads of Resiliency and Vulnerability.
REVIEWS
"This highly readable, informative text recounts the story of 140 trafficked children as well as the history of this criminal act and its consequences … Goz´dziak recognized the need for a well-researched, objective point of view and presents the challenges and the facts that victims of trafficking face even when identified and rescued from their horrific situations ... Recommended."
— Choice

"Gozdziak's work is a welcome addition to the critical study of anti-trafficking institutions and services, a nuanced and compassionate portrayal of the complex lived realities of young people who move and migrate, however precariously, in search of better opportunities and futures."
— Refuge

"By centering trafficked youth's voices and experiences, Gozdziak demonstrates the importance of survivor-centered approaches, even when their narratives contradict and complicate current antitrafficking discourse."
— Criminal Law and Criminal Justice Books

"This is a thoughtful and important book about victims of child trafficking.  Its strength lies in the juxtaposition of programmatic responses to trafficking with child survivors’ own perceptions of their experiences and needs."
— Alicia Peters, University of New England