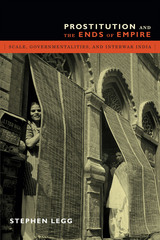 Officially confined to red-light districts, brothels in British India were tolerated until the 1920s. Yet, by this time, prostitution reform campaigns led by Indian, imperial, and international bodies were combining the social scientific insights of sexology and hygiene with the moral condemnations of sexual slavery and human trafficking. These reformers identified the brothel as exacerbating rather than containing "corrupting prostitutes" and the threat of venereal diseases, and therefore encouraged the suppression of brothels rather than their urban segregation. In this book, Stephen Legg tracks the complex spatial politics surrounding brothels in the interwar period at multiple scales, including the local, regional, national, imperial, and global. Campaigns and state policies against brothels did not just operate at different scales but made scales themselves, forging new urban, provincial, colonial, and international formations. In so doing, they also remade the boundary between the state and the social, through which the prostitute was, Legg concludes, "civilly abandoned."
AUTHOR BIOGRAPHY
Stephen Legg is Associate Professor in the School of Geography at the University of Nottingham. He is the author of Spaces of Colonialism: Delhi's Urban Governmentalities and the editor of Spatiality, Sovereignty and Carl Schmitt: Geographies of the Nomos.
REVIEWS
-- Harleen Singh American Historical Review

2. Assembling India: The Birth of SITA 95

Conclusion. Within and beyond the City 239