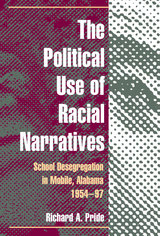 Arguing that politics is essentially a contest for meaning and that telling a story is an elemental political act, Richard A. Pride lays bare the history of school desegregation in Mobile, Alabama, to demonstrate the power of narrative in cultural and political change. This book describes the public, personal, and meta-narratives of racial inequality that have competed for dominance in Mobile. Pride begins with a white liberal's quest to desegregate the city's public schools in 1955 and traces which narratives--those of biological inferiority, white oppression, the behavior and values of blacks, and others--came to influence public policy and opinion over four decades. Drawing on contemporaneous sources, he reconstructs the stories of demonstrations, civic forums, court cases, and school board meetings as citizens of Mobile would have experienced them, inviting readers to trace the story of desegregation in Mobile through the voices of politicians, protestors, and journalists and to determine which narratives were indeed most powerful. More than a retelling of Mobile's story of desegregation, The Political Use of Racial Narratives promotes the value of rhetorical and narrative analysis in the social sciences and history.
AUTHOR BIOGRAPHY
Richard A. Pride, professor emeritus of political science at Vanderbilt University, is the coauthor of The Burden of Busing: The Politics of Desegregation in Nashville, Tennessee.