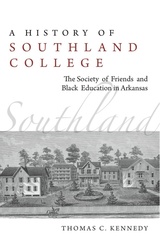 In 1864 Alida and Calvin Clark, two abolitionist members of the Religious Society of Friends from Indiana, went on a mission trip to Helena, Arkansas. The Clarks had come to render temporary relief to displaced war orphans but instead found a lifelong calling. During their time in Arkansas, they started the school that became Southland College, which was the first institution of higher education for blacks west of the Mississippi, and they set up the first predominately black monthly meeting of the Religious Society of Friends in North America. Their progressive racial vision was continued by a succession of midwestern Quakers willing to endure the primitive conditions and social isolation of their work and to overcome the persistent challenges of economic adversity, social strife, and natural disaster. Southland’s survival through six difficult and sometimes dangerous decades reflects both the continuing missionary zeal of the Clarks and their successors as well as the dedication of the black Arkansans who sought dignity and hope at a time when these were rare commodities for African Americans in Arkansas.
AUTHOR BIOGRAPHY
Thomas C. Kennedy is the author of The Hound of Conscience: A History of the No-Conscription Fellowship, 1914–1919 and British Quakerism, 1860–1920: The Transformation of a Religious Community. He has also written numerous articles on Quakers in Arkansas.
TABLE OF CONTENTS
Contents
Preface and Acknowledgments
1. Worlds Apart
2. Friends and Freedmen
3. The Curse of Slavery and War
4. The Bible and the Spelling Book
5. Trials and Triumphs
6. The End of the First Generation
7. From Miz’ Clark to Jim Crow
8. A Troubled Decade
9. The Wolford Era
10. New Beginnings and Unhappy Endings
11. An Avenue of Great Service
12. The Guard Changes
13. Last Days
Epilogue
Appendix A
Appendix B
Appendix C
Notes
Bibliography
Index
REQUEST ACCESSIBLE FILE