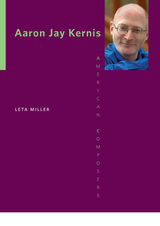 Winner of both the Pulitzer Prize and the Grawemeyer Award, Aaron Jay Kernis achieved recognition as one of the leading composers of his generation while still in his thirties. Since then his eloquent yet accessible style, emphasis on melody, and willingness to engage popular as well as classical forms has brought him widespread acclaim and admiring audiences.

Leta Miller's biography offers the first survey of the composer's life and work. Immersed in music by middle school, and later training under Theodore Antoniou, John Adams, Jacob Druckman, and others, Kernis rejected the idea of distancing his work from worldly concerns and composed on political themes. His Second Symphony, from 1991, engaged with the first Gulf War; 1993's Still Moment with Hymn was a reaction to the Bosnian Genocide; and the next year's Colored Field and 1995's Lament and Prayer dealt with the Holocaust. Yet Kernis also used sources as disparate as futurist agitprop and children's games to display humor in his work. Miller's analysis addresses not only Kernis's wide range of subjects but also the eclecticism that has baffled critics, analyzing his dedication to synthesis and the themes consistent in his work. Informed and engaging, Aaron Jay Kernis gives a rare mid-career portrait of a major American cultural figure.

AUTHOR BIOGRAPHY
Leta E. Miller is a professor of music at the University of California, Santa Cruz. She is the author of Music and Politics in San Francisco: From the 1906 Quake to the Second World War.
TABLE OF CONTENTS
Cover
Title
Contents
Acknowledgments
1. Introduction
2. Learning the Craft: Early Years and Training (1960–1983)
3. Kernis Meets the New York Philharmonic
4. Coming to Grips with History (1984–1991)
5. War, with Interludes (1991–1995)
6. Triumphs and Tribulations: Big Commissions, Big Risks, Big Rewards (1995–2001)
7. Family Matters (2002–2009)
8. Looking to the Future
Appendix
Suggested Listening
Notes
Index