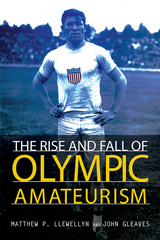 Matthew P. Llewellyn and John Gleaves analyze how this astonishing transformation took place. Drawing on Olympic archives and a wealth of research across media, the authors examine how an elite--white, wealthy, often Anglo-Saxon--controlled and shaped an enormously powerful myth of amateurism. The myth assumed an air of naturalness that made it seem unassailable and, not incidentally, served those in power. Llewellyn and Gleaves trace professionalism's inroads into the Olympics from tragic figures like Jim Thorpe through the shamateur era of under-the-table cash and state-supported athletes. As they show, the increasing acceptability of professionals went hand-in-hand with the Games becoming a for-profit international spectacle. Yet the myth of amateurism's purity remained a potent force, influencing how people around the globe imagined and understood sport.

Timely and vivid with details, The Rise and Fall of Olympic Amateurism is the first book-length examination of the movement's foundational ideal.
AUTHOR BIOGRAPHY
Matthew P. Llewellyn and John Gleaves are associate professors of kinesiology at California State University, Fullerton.
TABLE OF CONTENTS
Cover
Title
Copyright
Contents
Acknowledgments
Introduction
1. The Anatomy of Olympic Amateurism
2. A Universal Dilemma
3. The Rise of the Shamateur
4. “Ambassadors in Tracksuits”
5. The Amateur Apostle and the Cold War Games
6. The Global Games and the Intransigent Dictator
7. Selling Out the Amateur Ideal
8. The Ultimate Move
Epilogue
Notes
Index