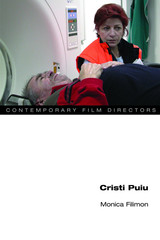 Cristi Puiu's black comedy The Death of Mr. Lazarescu announced the arrival of the New Romanian Cinema as a force on the film world stage. As critics and festival audiences embraced the new movement, Puiu emerged as its lodestar and critical voice. Monica Filimon explores the works of an artist dedicated to truth not as an abstract concept, but as the ephemeral revelation of the fuller, ungraspable world beyond the screen. Puiu's innovative use of the handheld camera as an observer and his reliance on austere, restricted narration highlight the very limits of human understanding, guiding the viewer's intellectual and emotional sensibilities to the reality that has been left unfilmed. Filimon examines the director's ethics of epiphany not only in relation to the collective and personal histories that have triggered it, but also in dialogue with the films, texts, and filmmakers that have shaped it.
AUTHOR BIOGRAPHY
Monica Filimon is an assistant professor of English at Kingsborough Community College, CUNY.
TABLE OF CONTENTS
Cover
Title
Contents
Acknowledgments
Ineffable Experiences of the Profance World
Interview with Cristi Puiu
Filmography
Bibliography
Index