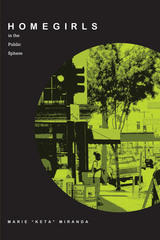 Girls in gangs are usually treated as objects of public criticism and rejection. Seldom are they viewed as objects worthy of understanding and even more rarely are they allowed to be active subjects who craft their own public persona—which is what makes this work unique. In this book, Marie “Keta” Miranda presents the results of an ethnographic collaboration with Chicana gang members, in which they contest popular and academic representations of Chicana/o youth and also construct their own narratives of self identity through a documentary film, It’s a Homie Thang! In telling the story of her research in the Fruitvale community of Oakland, California, Miranda honestly reveals how even a sympathetic ethnographer from the same ethnic group can objectify the subjects of her study. She recounts how her project evolved into a study of representation and its effects in the public sphere as the young women spoke out about how public images of their lives rarely come close to the reality. As Miranda describes how she listened to the gang members and collaborated in the production of their documentary, she sheds new light on the politics of representation and ethnography, on how inner city adolescent Chicanas present themselves to various publics, and on how Chicana gangs actually function.
AUTHOR BIOGRAPHY
Marie “Keta” Miranda is Assistant Professor of Mexican American Studies in the division of Bicultural/Bilingual Studies at the University of Texas at San Antonio.
TABLE OF CONTENTS