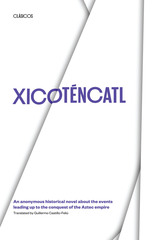 As Spain’s New World colonies fought for their independence in the early nineteenth century, an anonymous author looked back on the earlier struggle of native Americans against the Spanish conquistadores and penned this novel, Xicoténcatl. Writing from a decidedly anti-Spanish perspective, the author describes the historical events that led to the march on Tenochtitlán and eventual conquest of the Aztec empire in 1519 by Hernán Cortés and his Indian allies, the Tlaxcalans. Xicoténcatl stands out as a beautiful exposition of an idealized New World about to undergo the tremendous changes wrought by the Spanish Conquest. It was published in Philadelphia in 1826. In his introduction to this first English translation, Guillermo I. Castillo-Feliú discusses why the novel was published outside Latin America, its probable author, and his attitudes toward his Spanish and Indian characters, his debt to Spanish literature and culture, and the parallels that he draws between past and present struggles against Spanish domination in the Americas.
AUTHOR BIOGRAPHY
Guillermo I. Castillo-Feliú is Professor of Spanish and Chair of the Department of Modern Languages at Winthrop University in South Carolina.
TABLE OF CONTENTS