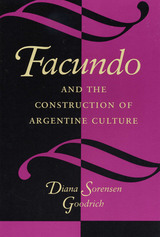 Domingo F. Sarmiento’s classic 1845 essay Facundo, Civilización y Barbarie opened an inquiry into the nature of Argentinian culture that continues to the present day. In this elegantly written study, Diana Sorensen explores the varied, and often conflicting, readings that Facundo has received since its publication and shows how these readings have contributed to the making and remaking of the Argentine nation and its culture. Sorensen’s analysis sheds new light on the intersection between canon formation and nation-building. While much has been written about Facundo as a primary text in Latin American letters, this is the first study that locates it within the problematics of canon formation and the cultural, social, and political contexts in which conflicting interpretations are constructed. This new approach to Facundo illuminates the interactions among institutions, cultural ideologies, and political life. This book will be important reading for everyone interested in questions of national identity and the institutionalization of a national tradition.
AUTHOR BIOGRAPHY
Raised in Argentina, Diana Sorensen is Dean of Arts and Humanities and James F. Rothenberg Professor of Romance Languages & Literatures and of Comparative Literature at Harvard University.
TABLE OF CONTENTS


AcknowledgmentsIntroductionOne. The Wars Of Persuasion: Conflict, Interpretation, and Power in the Early Years of Facundo’s ReceptionTwo. The Risks Of Fiction: Facundo and the Parameters of Historical WritingThree. The Wiles Of Disputation: Alberdi Reads FacundoFour. Facundo’s Travels To The Metropolitan CentersFive. The Nation Consolidated: The 1880’s and the Canonization of FacundoSix. A Classic Corrected: Rewriting the National MythsNotesBibliographyIndex