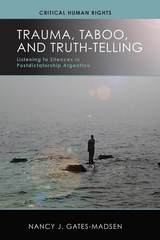 Argentina’s repressive 1976–83 dictatorship, during which an estimated thirty thousand people were “disappeared,” prompted the postauthoritarian administrations and human rights groups to encourage public exposure of past crimes and traumas. Truth commissions, trials, and other efforts have aimed to break the silence and give voice to the voiceless. Yet despite these many reckonings, there are still silences, taboos, and unanswerable questions.
Nancy J. Gates-Madsen reads between the lines of Argentine cultural texts (fiction, drama, testimonial narrative, telenovela, documentary film) to explore the fundamental role of silence—the unsaid—in the expression of trauma. Her careful examination of the interplay between textual and contextual silences illuminates public debate about the meaning of memory in Argentina—which stories are being told and, more important, which are being silenced. The imposition of silence is not limited to the military domain or its apologists, she shows; the human rights community also perpetuates and creates taboos.
AUTHOR BIOGRAPHY
Nancy J. Gates-Madsen is an associate professor of Spanish at Luther College. She is the cotranslator of Violet Island and Other Poems by Reina María Rodríguez.
TABLE OF CONTENTS

Introduction: Listening to Silences
1 Tortured Silence and Silenced Torture in Eduardo Pavlovsky’s Paso de dos
2 Filling in the Space of Disappearance: Eric Stener Carlson’s I Remember Julia: Voices of the Disappeared
3 “The Shape Described by Their Absence”: Disappearance in Juan José Saer’s La pesquisa
4 Silencing the Politics of Identity: From Elsa Osorio’s A veinte años, Luz to Telefé’s Montecristo
5 The Body of Knowledge: The Memory of Forgetting in Luisa Valenzuela’s La travesía
6 Fallout of the Memory “Boom”: Seeing and Not-Seeing the Ex-ESMA in Jonathan Perel’s El predio
Conclusion: Always Approaching, Never Arriving