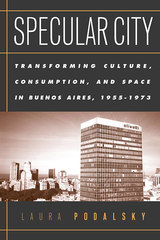 A sweeping account of one of the cultural centers of Latin America, Specular City tells the history of Buenos Aires during the interregnum after Juan Perón's fall from power and before his restoration. During those two decades, the city experienced a rapid metamorphosis at the behest of its middle class citizens, who were eager to cast off the working-class imprint left by the Perónists. Laura Podalsky discusses the ways in which the proliferation of skyscrapers, the emergence of car culture, and the diffusion of an emerging revolution in the arts helped transform Buenos Aires, and, in so doing, redefine Argentine collective history.More than a cultural and material history of this city, this book also presents Buenos Aires as a crucible for urban life. Examining its structures through films, literatures, new magazines, advertising and architecture, Specular City reveals the prominent place of Buenos Aires in the massive changes that Latin America underwent for a new, modern definition of itself.
AUTHOR BIOGRAPHY
Laura Podalsky is Assistant Professor in the Department of Spanish and Portuguese at Ohio State University.
TABLE OF CONTENTS


List of IllustrationsPrefaceAcknowledgmentsIntroduction: Urban Formations and Critical ScaffoldingINTERRUPTION: The Spectacular City1. Residual Voices and Emergent Practices: Reformulating Buenos Aires after PerónINTERSTICES: The Politics of Bricolage in Villas Miserias and Berni's Collages2. High-Rise Apartments, Arcades, Cars, Hoteles de Cita, and the Public-Private DivideINTERLUDE: The Di Tella and the Manzana Loca3. Circulating Desires: The Culture Industry and the Promotion of New Urban SubjectivitiesINTERSPERSION: Architecture on the Up and Out4. Consuming Sex in the City: Censorship and the Dangers of Promiscuous TextsINTERVENTION: La hora de los hornos in the Advertising AgeEpilogueNotesSelected FilmographySelected BibliographyIndex