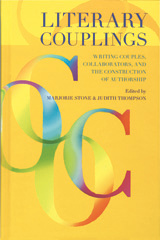 This innovative collection challenges the traditional focus on solitary genius by examining the rich diversity of literary couplings and collaborations from the early modern to the postmodern period. Literary Couplings explores some of the best-known literary partnerships—from the Sidneys to Boswell and Johnson to Sylvia Plath and Ted Hughes—and also includes lesser-known collaborators such as Daphne Marlatt and Betsy Warland. The essays place famous authors such as Samuel Coleridge, Oscar Wilde, and William Butler Yeats in new contexts; reassess overlooked members of writing partnerships; and throw new light on texts that have been marginalized due to their collaborative nature. By integrating historical studies with authorship theory, Literary Couplings goes beyond static notions of the writing "couple" to explore literary couplings created by readers, critics, historians, and publishers as well as by writers themselves, thus expanding our understanding of authorship.

“The notion of what constitutes a ‘literary couple’ is bound to be extended by future critics. But the unusually high quality of the thirteen essays that Thompson and Stone have collected makes this a truly precious book. . . [It] is itself admirably heterchoric, blending the shrewd voices of its eight Canadian, six American, and one Australian contributors.”—U.C. Knoepflmacher, Princeton University, Modern Philology