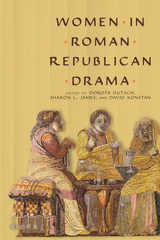 Latin plays were written for audiences whose gender perspectives and expectations were shaped by life in Rome, and the crowds watching the plays included both female citizens and female slaves. Relationships between men and women, ideas of masculinity and femininity, the stock characters of dowered wife and of prostitute—all of these are frequently staged in Roman tragedies and comedies. This is the first book to confront directly the role of women in Roman Republican plays of all genres, as well as to examine the role of gender in the influence of this tradition on later dramatists from Shakespeare to Sondheim.
AUTHOR BIOGRAPHY
Dorota Dutsch is an associate professor of classics at University of California, Santa Barbara, and the author of Feminine Discourse in Roman Comedy. Sharon L. James is an associate professor of classics at the University of North Carolina at Chapel Hill. The author of Learned Girls and Male Persuasion, she also has a YouTube channel (Sharon James) of scenes from Roman dramas. David Konstan is a professor of classics at New York University and the author of many books, including Roman Comedy and Greek Comedy and Ideology.
TABLE OF CONTENTS