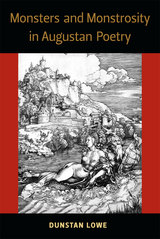 Monsters and Monstrosity in Augustan Poetry
by Dunstan Lowe
University of Michigan Press, 2015
Cloth: 978-0-472-11951-6
Roman poets of the Augustan period reinvented monsters from Greek myth, such as Harpies, Furies, and the warring Centaurs and Giants. These monsters represented the attractions and dangers of novelty in various contexts, ranging from social values to artistic innovation. Rome’s two great epics of the early principate, Vergil’s Aeneid and Ovid’s Metamorphoses, are both filled with mythical monsters. Like the culture that produced them, these poets were fascinated by unfamiliar forms despite their potential to disturb and disrupt.


Monsters and Monstrosity in Augustan Poetry is the first full-length study of monsters in Augustan poetry, and the first metapoetic reading of monstrosity in classical antiquity. Dunstan Lowe takes a fresh approach to the canonical works of Vergil, Ovid, and their contemporaries, contributing to a very recent turn toward marvels, monsters, and deformity in classical studies.


Monsters provided a fantastical means to explore attitudes toward human nature, especially in its relationship with sex. They also symbolized deformations of poetic form. Such gestures were doomed to replay the defeat of hypermasculine monsters yet, paradoxically, they legitimized poetic innovation. Lowe proposes that monstrosity was acutely topical during the birth of the principate, having featured in aesthetic debates of the Hellenistic age, while also serving as an established, if controversial, means for public figures to amaze the population and display their power.


Monsters and Monstrosity in Augustan Poetry will appeal to scholars and students of classical Latin literature and of interdisciplinary monster studies.
AUTHOR BIOGRAPHY
Dunstan Lowe is Lecturer in Latin Literature at the University of Kent.
REVIEWS
"Lowe has provided wide ranging case studies that demonstrate monsters can be deployed by poets both positively, in the case of poetic innovation, and negatively, in the case of portraying female characters in a misogynistic manner as well as poetic decadence."
--Christina Franzen, Bryn Mawr Classical Review

"A well-organized, clearly written critical survey of the monsters, derived mythology, that figure in the poetry of Augustan Rome and of their political and social significance. Lowe’s exploration of the allure or terror that Augustan poets lend female monsters and the “hypermasculinity” of male monsters will interest students of gender…Recommended."
--Choice Reviews
— J. D. Reed, Choice Reviews

"Monsters is particularly valuable for its contributions to the study of gender and monstrosity, a paradigm of analysis that surfaces in several chapters, and is a notable addition to scholarship on metapoetics and sublimity."
--CJ-Online