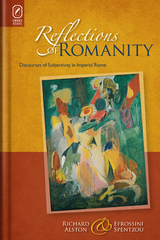 Reflections of Romanity: Discourses of Subjectivity in Imperial Rome, by Richard Alston and Efrossini Spentzou, challenges and provokes debate about how we understand the Roman world, and ourselves, by engagement with the early imperial literature of the mid-first to early second-century CE. Alston and Spentzou explore Roman subjectivity to illuminate a society whose fragmentation presented considerable challenges to contemporary thinkers. These members of the elite and intellectual classes faced complex ideological choices in relation to how they could define themselves in relation to imperial society.

Reflections of Romanity draws on present-day reflections on selfhood while at the same time uncovering processes of self-analysis, notably by tracing individuals’ reactions to moments of crisis or uncertainty. Thus it sets up a dialogue between the ancient texts it discusses, including the epics of Lucan and Statius, the letters of the Younger Pliny, Silius Italicus’ Punica, and Tacitus’ historical writings, and works of the modern period. Given the importance of classical thinking about the self in modern thought, this book addresses both a classical and a philosophical/literary critical audience.

AUTHOR BIOGRAPHY
Richard Alston is professor of Roman history and Efrossini Spentzou is senior lecturer in Latin, both at Royal Holloway, University of London.
REVIEWS
“This is a thought-provoking and absorbing book. Its methodology and its studied orientation, as much toward the concerns of the present as the past, mark it out as a distinctive contribution.”
—Duncan Kennedy, professor of Latin literature, Bristol University