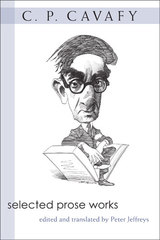 "A timely and significant supplement to C. P. Cavafy's poetic canon, the Selected Prose Works, eloquently translated and meticulously annotated by Peter Jeffreys, allows readers yet another creative engagement with the greatest Greek writer since antiquity. Marked by a wide and intriguing range of interests, these writings offer a rich trove for general readers and scholars alike, who from now on will find it difficult to discuss Cavafy's poetry without reference to his prose."
---Vassilis Lambropoulos, C. P. Cavafy Professor of Modern Greek, University of Michigan

"Peter Jeffreys gives us a rare gift---access to Constantine Cavafy's prose work. Through his intelligent translation, these texts, which range from literary criticism to personal notes, from essays on the Greek language to the Parthenon marbles, offer unexpected entry into the mind of one of the twentieth century's greatest literary figures. They suggest new ways to think about not only Cavafy's remarkable poetry but also the man himself. An indispensable companion for all who love Cavafy's work."
---Gregory Jusdanis, The Ohio State University

Constantine Cavafy (1863–1933) is arguably the most important modern poet of Greece and Greek culture. Long a resident of Egypt and then Constantinople, Cavafy in his poems and prose works tended to focus on Greco-Roman antiquity, on Greece's national identity, and on personal and mythological images and themes including his ethnicity and sexual identity. He wrote some 150 poems, plus a few works in collaboration with his brother John.

His poetical works have been much translated and discussed, but until now, very little consideration has been given to his prose works, in part because many remained untranslated from the original Greek. This book collects Cavafy's more interesting prose pieces and translates those that originally appeared in Greek.

Of the forty pieces included, only thirteen have previously appeared in print, and of those thirteen only a few were in English. The pieces include essays, "prose poems," short stories, self-assessments, and considerations of other poets, including John Keats. This significant new collection offers a different perspective on the well-known Cavafy.

Peter Jeffreys, Assistant Professor of English at Suffolk University in Boston, received a Doctorate in English Literature from the University of Toronto. He is the author of Eastern Questions: Hellenism and Orientalism in the Writings of E.M. Forster and C.P. Cavafy and the editor of The Forster-Cavafy Letters: Friends at a Slight Angle.  He is currently working on a bio-critical study of C. P. Cavafy and the decadent tradition.