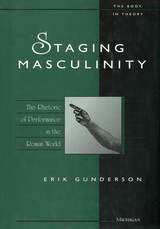 Performance was one of the five canonical branches of oratory in the classical period, but it presents special problems that distinguish it from concerns such as composition and memory. The ancient performer was supposed to be a "good man" and his performance a manifestation of an authentic and authoritative manliness. But how can the orator be distinguished from a mere actor? And what is the proper role for the body, given that it is a potential object of desire?
Erik Gunderson explores these and other questions in ancient rhetorical theory using a variety of theoretical approaches, drawing in particular on the works of Judith Butler, Michel Foucault, and Jacques Lacan. His study examines the status of rhetorical theory qua theory, the production of a specific version of body in the course of its theoretical description, oratory as a form of self-mastery, the actor as the orator's despised double, the dangers of homoerotic pleasure, and Cicero's De Oratore, as what good theory and practice ought to look like.
Erik Gunderson is Assistant Professor of Greek and Latin, Ohio State University.
AUTHOR BIOGRAPHY

REVIEWS
". . . The sheer number of ideas G[underson] articulates in the course of the book testifies to the strength and flexibility of his perspective. He knows ancient rhetorical theory inside and out, and his readings of Cicero and Quintillian are consistently insightful and useful."
—Joy Connolly, Bryn Mawr Classical Review
— Joy Connolly, Bryn Mawr Classical Review