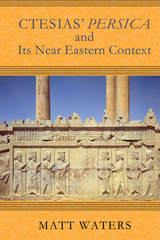 The Persica is an extensive history of Assyria and Persia written by the Greek historian Ctesias, who served as a doctor to the Persian king Artaxerxes II around 400 bce. Written for a Greek readership, the Persica influenced the development of both historiographic and literary traditions in Greece. It also, contends Matt Waters, is an essential but often misunderstood source for the history of the Achaemenid Persian Empire.
Waters, as a historian of Persia with command of Akkadian, Elamite, and Old Persian languages in addition to Latin and Greek, offers a fresh interdisciplinary analysis of the Persica. He shows in detail how Ctesias’ history, though written in a Greek literary style, was infused with two millennia of Mesopotamian and Persian motifs, legends, and traditions. This Hellenized version of Persian culture was enormously influential in antiquity, shaping Greek stereotypes of effeminate Persian monarchs, licentious and vengeful queens, and conniving eunuchs. Waters’ revealing study contributes significantly to knowledge of ancient historiography, Persian dynastic traditions and culture, and the influence of Near Eastern texts and oral tradition on Greek literature.
AUTHOR BIOGRAPHY
Matt Waters is a professor of classics and ancient history at the University of Wisconsin–Eau Claire. He is the author of Ancient Persia: A Concise History of the Achaemenid Empire, 550–330 bce and A Survey of Neo-Elamite History.
TABLE OF CONTENTS

Introduction
1 The Eunuch In-between
2 Semiramis, Queen of Battle
3 A Different Kind of Education for Cyrus
4 The Inverted Hero’s Many Faces: Other Sagas in the Persica
Conclusion