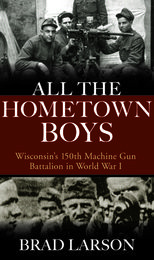 In the summer of 1917 three Wisconsin National Guard companies came together to form the 150th Machine Gun Battalion of the now famous 42nd “Rainbow” Division. As true comrades, they relied on one another for support as they fought in every major battle of the American Expeditionary Forces, including the landmark battle of Chateau Thierry, which cost the unit dearly. As one of Wisconsin’s most celebrated units, a soldier coming from the battalion was selected to represent the state at the unveiling of the Tomb of the Unknown Soldier in Washington, D.C., in 1921. Today, the 150th is all but forgotten, in part because their unit history was never written. Through letters, diaries, and other recollections, Larson tells us the story of these Guardsmen’s experiences. He traces the path of their wartime service and considers the impact of war’s trauma and tedium on their lives.
AUTHOR BIOGRAPHY
Brad Larson has been the director of the Oshkosh Public Museum since 1989 and has been researching and presenting public programs about the 150th Machine Gun Battalion for many years. He is the author of Voices of History, 1941–1945.
REQUEST ACCESSIBLE FILE