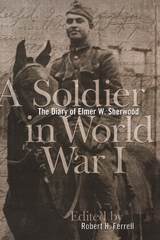 In April 1917 a sophomore at Indiana University, inspired by his grandfather's service in the Union army during the Civil War, left school and enlisted with a National Guard unit in Indianapolis that became the 150th Field Artillery Regiment. Before long the young man, Elmer W. Sherwood, found himself fighting in France. Sherwood kept a diary of his time overseas, including his experiences in the army of occupation following the war's end. A Soldier in World War I: The Diary of Elmer W. Sherwood captures the words of the Hoosier as he wrote them on the front lines. The book also includes a shipboard diary Sherwood sent home from France shortly after his arrival, which appeared in his hometown newspaper.
AUTHOR BIOGRAPHY
Robert H. Ferrell is a noted historian of American foreign policy and American history. He began teaching at Indiana University in 1953. He has written extensively on U.S. presidents. Ferrell's books include Dear Bess: The Letters of Harry to Bess Truman and Woodrow Wilson and World War I.
TABLE OF CONTENTS