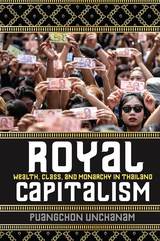 Thanks to its active role in national politics, the market economy, and popular culture, the Thai crown remains both the country's dominant institution and one of the world's wealthiest monarchies. Puangchon Unchanam examines the reign of Thailand's King Bhumibol Adulyadej or Rama IX (1946–2016) and how the crown thrived by transforming itself into a distinctly "bourgeois" monarchy that co-opted middle-class values of hard work, frugality, and self-sufficiency.
The kingdom positioned itself to connect business elites, patronize local industries, and form strategic partnerships with global corporations. Instead of restraining or regulating royal power, white-collar workers joined with the crown to form a dynamic, symbiotic force that has left the lower classes to struggle in their wake. Unchanam presents a surprising case study that kings and queens live long and large in cooperation with the bourgeoisie's interests and ideology.
AUTHOR BIOGRAPHY
Puangchon Unchanam is a lecturer in the Department of Political Science at Naresuan University.
TABLE OF CONTENTS


Contents
List of Illustrations vii
Acknowledgments ix
List of Abbreviations xi
A Note on Translation and Transliteration xiii
Introduction: The King Is (Not) Dead, Long Live Capitalism! 3
1 The Genesis of the Bourgeois Monarchy 29
2 The Rise and Triumph of the Bourgeois Crown 64
3 The King and (Bourgeois) Eyes 105
4 The Crown versus the Crowd 154
5 All Hail the King 217
Appendix 239
Notes 245
Bibliography 287
Index 305