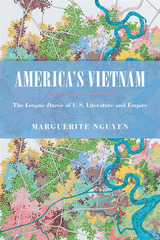 America’s Vietnam challenges the prevailing genealogy of Vietnam’s emergence in the American imagination—one that presupposes the Vietnam War as the starting point of meaningful Vietnamese-U.S. political and cultural involvements. Examining literature from as early as the 1820s, Marguerite Nguyen takes a comparative, long historical approach to interpreting constructions of Vietnam in American literature. She analyzes works in various genres published in English and Vietnamese by Monique Truong and Michael Herr as well as lesser-known writers such as John White, Harry Hervey, and Võ Phiến. The book’s cross-cultural prism spans Paris, Saigon, New York, and multiple oceans, and its departure from Cold War frames reveals rich cross-period connections.

America’s Vietnam recounts a mostly unexamined story of Southeast Asia’s lasting and varied influence on U.S. aesthetic and political concerns. Tracking Vietnam’s transition from an emergent nation in the nineteenth century to a French colony to a Vietnamese-American war zone, Nguyen demonstrates that how authors represent Vietnam is deeply entwined with the United States’ shifting role in the world. As America’s longstanding presence in Vietnam evolves, the literature it generates significantly revises our perceptions of war, race, and empire over time.

Marguerite Nguyen is an Assistant Professor of English at Wesleyan University.