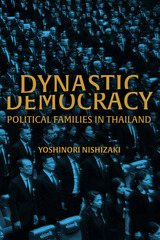 The political history of Thailand since the overthrow of absolute monarchy in 1932 has conventionally been interpreted as a long series of popular struggles for representative democracy and against military authoritarian rule. Yoshinori Nishizaki argues that this history can be better understood as one of struggles by elite political families for and against “dynastic democracy”—a form of democracy that is characterized by the patrimonial transmission of power between members of select ruling families. Dynastic Democracy suggests it is these familial-based contestations for political ascendancy that underlie the tumultuous politics of Thailand, a country that has experienced no fewer than twenty-two coups over the course of the past century.

Drawing extensively on Thai-language primary sources, including assets documents and cremation volumes for deceased politicians and their kin, Nishizaki traces the intricate blood and marriage connections among Thailand’s political families. These families may fall into two categories: influential commoner families that have held parliamentary seats since 1932 and form the core of Thailand’s dynastic democracy; and upper-class families that are kin to or aligned ideologically with the royal family and have repeatedly challenged dynastic democracy through coups, constitutional changes, and other political maneuvers. Nishizaki’s exploration of dynastic democracy illustrates how democratic pluralism in Thailand has been consistently stifled, to the detriment of ordinary citizens. Dynastic Democracy fleshes out a widely acknowledged yet heretofore empirically unsubstantiated facet of Thai political history—that in Thai politics, family matters.
AUTHOR BIOGRAPHY
Yoshinori Nishizaki is an associate professor in the Department of Southeast Asian Studies at the National University of Singapore (NUS). He is the author of Political Authority and Provincial Identity in Thailand. His articles on Thai politics have appeared in the Journal of Asian Studies, Modern Asian Studies, and elsewhere.
REVIEWS
“Nishizaki is one of the keenest analysts of Thai politics working today, and Dynastic Democracy just reinforces that opinion. This is a welcome addition to a growing political science and sociology literature on the causes and consequences of political dynasties.”—Allen Hicken, University of Michigan


“Nishizaki argues that Thailand has evolved a ‘patrimonial dynastic democracy,’ a political system in which family connections and authoritarian structures obstruct the political will of the majority. This thoroughly researched revisionist study ranging from the 1930s to the present day will be a work of reference for those interested in Thai politics and political networks for a long time to come.”—Chris Baker, coauthor of A History of Thailand


Lists of Tables and Figures
Preface

1 Family Rule in the Thai Parliament: An Overview
2 Old Families Die Hard, 1932-73
3 Birds of a Feather: Network Monarchy
4 Ironies of Political Reforms
5 The Royalist Regime Out on a Limb
6 Thailand’s Dynastic Democracy in Comparative Perspective