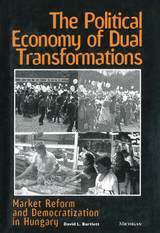 In the early 1990s, scholars voiced skepticism about the capacity of Eastern Europe's new democracies to manage simultaneous political and economic reform. They argued that the surge of popular participation following democratization would thwart efforts by successor governments to enact market reforms that imposed high costs on major elements of post-Communist society. David Bartlett challenges the conventional wisdom regarding the hazards of "dual transformations": far from hindering marketization, democratization facilitated it. Bartlett argues that the transition to democracy in East Central Europe lowered the political barriers to market reforms by weakening the ability of actors most vulnerable to marketization to manipulate the existing institutional structure to stop or slow down the process.
Although the analysis focuses on Hungary, whose long history of market reforms makes it an ideal vehicle for assessing the impact of institutional change on reform policy, the author shows how his findings call into question the use of "shock therapy" and arguments, based on the experience in East Asia, that economic development and democratization are incompatible.
This book will appeal to economists, political scientists, and others interested in transition problems in formerly communist countries, democratic transitions, and the politics of stabilization and adjustment.
David L. Bartlett is Assistant Professor of Political Science, Vanderbilt University.
TABLE OF CONTENTS
Contents
Acronyms
Tables
Acknowledgments
Introduction
Part 1: An Institutional Approach to Eastern Europe's Transition
1. Party and State Institutions in Dual Transformations
Part 2: Economic Reform in Communist Hungary, 1979−89
2. Macroeconomic Stabilization under Reform Communism
3. Structural Adjustment and Market Socialism
Part 3: Economic Reform in Democratic Hungary, 1990−94
4. Political Institutions and Hungary's Negotiated Transition
5. Stabilization Policy in the Postcommunist Period
6. Structural Adjustment in Hungary's New Democracy
Part 4: Conclusions
7. Implications and Comparative Perspectives
Appendix
Index
REQUEST ACCESSIBLE FILE