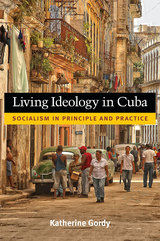 In Living Ideology in Cuba, Katherine Gordy demonstrates how the Cuban state and its people engage in an ongoing negotiation that produces a “living ideology.” In contrast to official slogans and fiats, Cuba’s living ideology is a decentralized phenomenon, continually adapting, informing, and responding to daily life, without losing sight of the fundamental national principles of socioeconomic equality, unified leadership, and inclusive nationalism.


Tracing Cuba’s ideological history, Gordy first looks at the ways in which the 19th century wars of independence and the 1959 revolution were used as the basis for both challenging and legitimizing Cuban socialism. Following the embrace of a pure socialist ideology in the 1960s, state policies of the 1970s became more accommodating of market imperatives, while still holding on to the principles articulated by Che Guevara and Karl Marx. In the 1990s, the Cuban people themselves pushed back against further economic reforms, reasserting the value of socioeconomic equality. Gordy also examines ideological debates among intellectuals, from the controversy sparked by Fidel Castro’s “Words to the Intellectuals” speech to the demand in the 1990s for a separation between academia and the state—not to safeguard academia from politics, but to ensure that academics as such could contribute to the political dialogue.
AUTHOR BIOGRAPHY
Katherine A. Gordy is Associate Professor of Political Science at San Francisco State University.
REVIEWS
"[Living Ideology in Cuba] challenges traditional negative approaches to study the concept of ideology, offering a more positive interpretation of the concept."
--- Hib: Revista de Historia Iberoamericana
— Juan Carlos Medel, Hib: Revista de Historia Iberoamericana