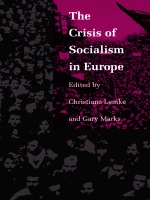 The revolutions in Eastern Europe and the recasting of socialism in Western Europe since 1989 have given rise to intense debate over the origins, character, and implications of the “crisis” of socialism. Is socialism in ideological, electoral, or organizational decline? Is the decline inevitable or can socialism be revitalized? This volume draws together historians and political scientists of Eastern and Western European politics to address these questions.
The collection begins with an historical overview of socialism in Western Europe and moves toward the suggestion of a framework for a post-socialist discourse. Among the topics covered are: the birth and death of communism and a regime type in Eastern Europe; how different forms of national communism were smothered by Sovietization in the postwar period; the origins of revolutions in Eastern Europe; the potential for social democracy in Hungary; the role of the Left in a reunified German; and directions for the Left in general.

Christiane Lemke is on the Political Science faculty on the Freie Universitat of Berlin.

Gary Marks is Professor of Political Science and founding Director of the Center for European Studies at the University of North Carolina, Chapel Hill.

From Decline to Demise? The Fate of Socialism in Europe / Christiane Lemke and Gary Marks 1

The Crisis of Socialism in Central and Eastern Europe and Socialism's Future / Sharon L. Wolchik 84

Classes and Parties in the Transition to Postcommunism: The Case of Hungary, 1989-1990 / Ivan Szelenyoi and Szonja Szelenyi 114

After the Golden Age: Is Social Democracy Doomed to Decline? / Wolfgang Merkel 136

Toward a Postsocialist Politics? A Historical Postscript / Konrad H. Jarausch 228