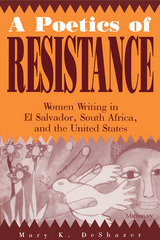 The recent critical works that look at literature as a weapon of resistance have frequently neglected the genre of poetry, particularly the poetry of Third World women writers. A Poetics of Resistance is the first book-length examination of poetry written by woman of El Salvador, South Africa, and the United States and the ways it bears witness to political struggle and produces new kinds of knowledge.

Engaging the works of critics such as Chandra Mohanty, Barbara Harlow, Claribel Alegria, Albie Sachs, and Audre Lorde, among others, Mary DeShazer reconceptualizes traditional notions of resistance and literature and the relationship between them. She argues that women’s voices have been underrepresented in previous analyses of Third World resistance poetry, and that when examined collectively, their work reveals overtly gendered concerns that distinguish it from that of their male counterparts.

DeShazer defines resistance as an active quest for justice and a means of collective empowerment. She looks at the diasporic consciousness of exiled and dislocated women, examines the tensions between claims of identity and claims of difference, and explores the ways in which gender and struggle connect women across nationalities and historical imperatives. Her analysis of Salvadoran and South African women’s poetry reveal the ways in which poetic conventions can be seen as “political declarations of privilege,” casting a new light on women’s resistance poetry in the United States.
REQUEST ACCESSIBLE FILE