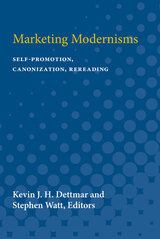 Rarely have genres of literary expression been looked upon or read as commodities within a market system; we tend to think of our literature as "pure," untainted by any interaction with the world of commerce. Critical accounts of modernism are frequently theorized across the divide between the project itself and the larger marketplace, the world of consumption. Marketing Modernisms calls into question this curious separation and examines the material, intellectual, and ideological practices that comprise the notion of "marketing." Marketing Modernisms is concerned with Anglo-American modernists and their potential readers in both the popular audience and the academy. Examining the forms of promotion employed by book publishing houses, in the editorial offices of literary magazines, and in the minds of modern writers, the essays bring to the fore little-known connections between writers such as Ezra Pound, T. S. Eliot, James Joyce, Virginia Woolf, and Langston Hughes, and the commercial marketplace they engaged. The book's provocative themes include the strategies that modernists and their publishers employed to market their work, to fashion themselves as artists or celebrities, and to bridge the gap between an avant-garde elite and the popular reader. Other essays explore the difficulties confronted by women, African American, and gay and lesbian writers in gaining literary acceptance and achieving commercial representation while maintaining the gendered, racial, and sexual aspects of their lives.