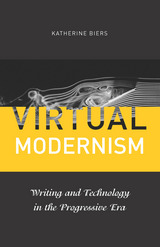 In Virtual Modernism, Katherine Biers offers a fresh view of the emergence of American literary modernism from the eruption of popular culture in the early twentieth century. Employing dynamic readings of the works of Stephen Crane, Henry James, James Weldon Johnson, Djuna Barnes, and Gertrude Stein, she argues that American modernist writers developed a “poetics of the virtual” in response to the rise of mass communications technologies before World War I. These authors’ modernist formal experimentation was provoked by the immediate, individualistic pleasures and thrills of mass culture. But they also retained a faith in the representational power of language—and the worth of common experience—more characteristic of realism and naturalism. In competition with new media experiences such as movies and recorded music, they simultaneously rejected and embraced modernity.

Biers establishes the virtual poetics of these five writers as part of a larger “virtual turn” in the United States, when a fascination with the writings of Henri Bergson, William James, and vitalist philosophy—and the idea of virtual experience—swept the nation. Virtual Modernism contends that a turn to the virtual experience of language was a way for each of these authors to carve out a value for the literary, both with and against the growth of mass entertainments. This technologically inspired reengagement with experience was formative for American modernism.

Situated at the crossing points of literary criticism, philosophy, media studies, and history, Virtual Modernism provides an examination of Progressive Era preoccupations with the cognitive and corporeal effects of new media technologies that traces an important genealogy of present-day concerns with virtuality.

Katherine Biers is assistant professor of English and comparative literature at Columbia University.