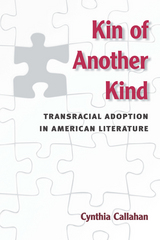 "The study of transracial adoption has long been dominated by historians, legal scholars, and social scientists, but with the growth of the lively field of humanistic adoption studies comes a growing understanding of the importance of cultural representations to the social meanings and even the practices of adoption itself . . . This book makes a valuable contribution in showing how important the theme of adoption has been throughout the twentieth century in representations of race relations, and in showing that the adoption theme has served to challenge racial norms as well as uphold them."
---Margaret Homans, Yale University

The subject of transracial adoption seems to be enjoying unprecedented media attention of late, particularly as white celebrities have made headlines by adopting children of color from overseas. But interest in transracial adoption is nothing new---it has long occupied a space in the public imagination, a space disproportionate with the number of people actually adopted across racial lines.

Even before World War II, when transracial adoption was neither legally nor socially sanctioned, American authors wrote about it, often depicting it as an "accident"---the result of racial ambiguity that prevented adopters from knowing who is white or black. After World War II, as the real-world practice of transracial and international adoption increased, American literary representations of it became an index not only of the changing cultural attitudes toward adoption as a way of creating families but also of the social issues that informed it and made it, at times, controversial.

Kin of Another Kind examines the appearance of transracial adoption in American literature at certain key moments from the turn of the twentieth century to the turn of the twenty-first to help understand its literary and social significance to authors and readers alike. In juxtaposing representations of African American, American Indian, and Korean and Chinese adoptions across racial (and national) lines, Kin of Another Kind traces the metaphorical significance of adoption when it appears in fiction. At the same time, aligning these groups calls attention to their unique and divergent cultural histories with adoption, which serve as important contexts for the fiction discussed in this study.

The book explores the fiction of canonical authors such as William Faulkner and Toni Morrison and places it alongside lesser-known works by Robert E. Boles, Dallas Chief Eagle (Lakota), and Sui Sin Far that, when reconsidered, can advance our understanding both of adoption in literature and of twentieth-century American literature in general.

Cynthia Callahan is Assistant Professor in the Department of English at Ohio State University, Mansfield.