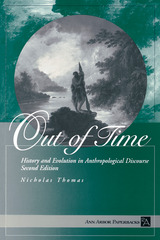 Out of Time: History and Evolution in Anthropological Discourse
by Nicholas Thomas
University of Michigan Press, 1996
Paper: 978-0-472-08377-0
Despite the enormous amount of work that has attempted to combine historical and anthropological approaches in recent years, few books have outlined the underlying premises that make integration of the two fields difficult. In Out of Time, Nicholas Thomas argues that a "historical perspective" cannot simply be added to conventional anthropology, which systematically takes ethnography "out of time." Drawing examples from the Polynesian anthropological literature, he points to discredited social evolutionary ideas that have persisted even after apparently dramatic theoretical shifts and to the need to take seriously sources that anthropologists have previously dismissed.
When it was first published in 1989, Out of Time generated much-needed discussion on the appropriate models for historical anthropology. Thomas considered that both the historical structuralism of Marshall Sahlins and neo-Marxist regional systems theory had failed to transcend crucial limitations of conventional anthropology. Yet they provided elements of a more stimulating and critical perspective, which would also take account of contemporary political developments in the Pacific region.
For this second edition, Thomas has added an afterword that reflects on the book's initial reception and brings its critique up to date. He suggests a need to historicize the professionalization of anthropology as a discipline to understand shifts in practice and the need to acknowledge the historical specificity and limits of all forms of cultural knowledge, whether "Western" or indigenous.
Out of Time will be a useful text for graduate courses in anthropology, history, and cultural studies.
"This book displays rare integrity: Thomas' intellectual stance toward the theoretical approaches of others is fully consistent with his own discursive practices." --Contemporary Pacific
Nicholas Thomas is Senior Research Fellow, Department of Archaeology and Anthropology, Australian National University.
REQUEST ACCESSIBLE FILE