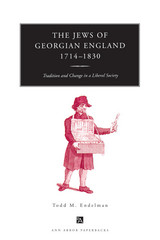 The movement from tradition to modernity engulfed all of the Jewish communities in the West, but hitherto historians have concentrated on the intellectual revolution in Germany by Moses Mendelssohn in the second half of the eighteenth century as the decisive event in the origins of Jewish modernity. In The Jews of Georgian England, Todd M. Endelman challenges the Germanocentric orientation of the bulk of modern Jewish historiography and argues that the modernization of European Jewry encompassed far more than an intellectual revolution.
His study recounts the rise of the Anglo-Jewish elite--great commercial and financial magnates such as the Goldsmids, the Franks, Samson Gideon, and Joseph Salvador--who rapidly adopted the gentlemanly style of life of the landed class and adjusted their religious practices to harmonize with the standards of upper-class Englishmen. Similarly, the Jewish poor--peddlers, hawkers, and old-clothes men--took easily to many patterns of lower-class life, including crime, street violence, sexual promiscuity, and coarse entertainment.
An impressive marshaling of fact and analysis, The Jews of Georgian England serves to illuminate a significant aspect of the Jewish passage to modernity.
"Contributes to English as well as Jewish history. . . . Every reader will learn something new about the statistics, setting or mores of Jewish life in the eighteenth century. . . ." --American Historical Review
Todd M. Endelman is William Haber Professor of Modern Jewish History, University of Michigan. He is also the author of Comparing Jewish Societies, Jewish Apostasy in the Modern World, and Radical Assimilation in English Jewish History, 1656-1945.
TABLE OF CONTENTS
Contents
Preface to the Ann Arbor Paperbacks Edition
Preface
Introduction
1 The Secular Basis for Jewish Toleration
2 Philo-Semitism in Anglo-Christianity
3 Anti-Jewish Sentiment-Religious and Secular
4 Gentlemen Jews: The Acculturation of the Anglo-Jewish Middle Class
5 Peddlers and Hawkers
6 Pickpockets and Pugilists
7 Reforming the Jewish Poor
8 Integration and Intermarriage
9 Jewish Citizens in a Liberal State
10 From Tradition to Modernity
Appendix: Statistics on Jewish Crime
Abbreviations
Bibliography
Notes
Index
REQUEST ACCESSIBLE FILE