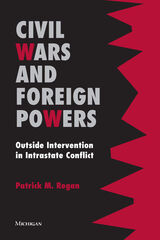 We have seen recent massive intervention by the United States and its allies in Europe in internal conflict in Bosnia and Kosovo. In Outside Intervention in Intrastate Conflict, Patrick Regan systematically answers the question about the conditions under which third parties intervene in civil conflicts to stop the fighting. It uses data on all civil conflicts since 1945 to identify those conflicts that are amenable to outside interventions and the types of interventions that are more likely to be successful.
Outside Intervention in Intrastate Conflict is a book about how governments can help facilitate the end of civil conflicts. In a time when internal conflicts appear to be increasing in number, and increasingly destabilizing, governments need to know what policies work and when. Interventions are generally of two sorts--unilateral, or when one state takes action, and multilateral, such as UN or NATO action. This book examines the conditions under which each form of intervention is most likely and most effective. The analysis suggests that three conditions associated with multi-lateral interventions will increase the likelihood of success: mutual consent of the parties involved; impartiality on the part of the intervenors; and the existence of a coherent intervention strategy. The questions are posed from the perspective of the decision maker and the answers offered are framed in a language familiar to the decision-making community. The book mixes descriptive case material with systematic statistical analysis of a unique data set of all civil conflicts since World War II, providing contemporary examples to illustrate overall trends in the data. Beyond the policy implications this work is also rich in theoretical development about issues of conflict and conflict management.
This book will appeal to students of international conflict, civil war, ethnic conflict, and those who are concerned with developing policy in the post-cold war world to deal with intrastate conflict.
Patrick M. Regan is Assistant Professor of Political Science, Binghamton University.
REQUEST ACCESSIBLE FILE