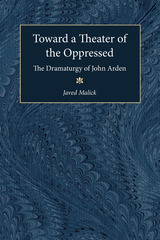 Toward a Theater of the Oppressed: The Dramaturgy of John Arden
by Javed Malick
University of Michigan Press, 1995
Cloth: 978-0-472-10587-8
Toward a Theater of the Oppressed is an engaging study of the dramaturgy of contemporary British playwright John Arden and the political implications of his work. Arden made his debut on the London stage in the wake of a powerful new wave of young, "angry" drama in England during the late 1950s. Javed Malick argues that in contrast to contemporaries like John Osborne, Harold Pinter, and Arnold Wesker, Arden offered a radically different approach to drama and theater, employing a long-neglected writing style that derived from pre-bourgeois popular traditions.
Malick situates Arden's dramaturgy in the wider context of the radical alternative tradition in Western drama, drawing connections to Brecht, Piscator, the radical playwrights of the 1960s. He then explores the formal structure, ideological implications, and historical significance of Arden's work, treating his stage plays as one dramaturgically coherent opus- from the early Waters of Babylon to his and Margaretta D'Arcy's ambitious trilogy, The Island of the Mighty. Finally, he discusses the last phase of Arden and D'Arcy's political and artistic development, which led them to turn their backs on the professional theater circuit. He argues that Arden's rejection of the institutional stage was the logical outcome of his persistent search for alternative forms of political theater.
Toward a Theater of the Oppressed will be invaluable reading for those interested in modern drama, political theater, and popular performance, as well as students of contemporary British drama.
Javed Malick is Reader in English, Khalsa College, University of Delhi, India.
REQUEST ACCESSIBLE FILE