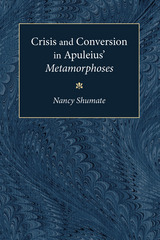 Crisis and Conversion in Apuleius' Metamorphoses
by Nancy Shumate
University of Michigan Press, 1996
Cloth: 978-0-472-10599-1
Apuleius' wonderful Latin novel Metamorphoses, written in the second century C.E., was for a long time neglected. In recent years some have attempted to understand the Metamorphoses by applying contemporary critical theory to the work, without notable success. In Crisis and Conversion in Apuleius' "Metamorphoses" Nancy Shumate takes a new and profitable approach: she uses an epistemologically oriented model of religious conversion to study the experiences of the novel's central character, Lucius, who is turned into an ass and back again.
Shumate draws on a wide range of literary and nonliterary representations of conversion in order to establish a useful theoretical framework. The Metamorphoses is exposed as a text anticipating later narratives in its concern with world-building, with the narrator's subjective reality, and with the invocation and critique of religious experience.
Crisis and Conversion in Apuleius' "Metamorphoses" will be of interest to classicists and scholars of Silver Latin and of the increasingly popular ancient novel, as well as to students of psychology and the sociology of religious experience.
Nancy Shumate is Associate Professor of Classical Languages and Literatures, Smith College.
REVIEWS
"We are dealing with a book very well written . . . and great industry has gone into its completion. . . . The author has postulated a novel approach that she can frequently substantiate."
--Electronic Antiquity
— Electronic Antiquity