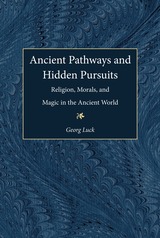 Ancient Pathways and Hidden Pursuits: Religion, Morals, and Magic in the Ancient World
by Georg Luck
University of Michigan Press, 2000
Cloth: 978-0-472-10790-2
Among the most thoughtful students of the ancient world, Georg Luck has offered subtle and nuanced interpretations of a broad range of classical subjects. Ancient Pathways, Hidden Pursuits brings together the best of Georg Luck's many papers and articles on Graeco-Roman life and thought in the realm of religious beliefs, occult practices, psychology, and morals. The collection complements Luck's Arcana Mundi, an introduction to magic and the occult in antiquity, which has been published in several languages.
The present volume includes the author's thoughts on Greek and Roman religions, early Christianity, Greek and Roman psychology and morals, and magic and the occult. Luck's main findings explore generally neglected areas of ancient civilization, locating magic and philosophy with religion as vehicles for moral and psychological guidance. Throughout this study, one finds meaning in "superstitious" and conflicting patterns of behavior and learns much about the nature of the human soul. This collection will serve as a valuable reference for those interested in the driving motivations of ancient man.
"The topics of the individual articles in this volume are very central and of great humanistic appeal, and they indeed form a thematic unity concerning man and religion in Greek and Roman society." --Ludwig Koenen, Herbert C. Youtie Distinguished University Professor of Papyrology, University of Michigan
Georg Luck is Professor of Classics, emeritus, The Johns Hopkins University.
REQUEST ACCESSIBLE FILE