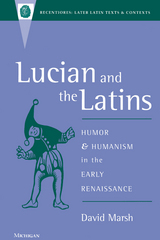 Lucian and the Latins: Humor and Humanism in the Early Renaissance
by David Marsh
University of Michigan Press, 1998
Cloth: 978-0-472-10846-6
The works of the second-century Greek satirist Lucian enjoyed a tremendous vogue in the early Renaissance. His Greek prose furnished one of the first texts in the Florentine classroom around 1400, and it aroused as much interest as Plato. At first praised as an eloquent rhetorician, Lucian was soon appreciated for his irreverent wit, which inspired new satirical and paradoxical currents in Renaissance literature.
Until now, no study has attempted to connect the Latin translators and imitators of Lucian with his wider European influence. In Lucian and the Latins, David Marsh describes how Renaissance authors rediscovered the comic writings of Lucian. He traces how Lucianic themes and structures made an essential contribution to European literature beginning with a survey of Latin translations and imitations, which gave new direction to European letters in the fifteenth and sixteenth centuries. The Lucianic dialogues of the dead and dialogues of the gods were immensely popular, despite the religious backlash of the sixteenth century. The paradoxical encomium, represented by Lucian's "The Fly" and "The Parasite," inspired so-called serious humanists like Leonardo Bruni and Guarino of Verona. Lucian's "True Story" initiated the genre of the fantastic journey, which enjoyed considerable popularity during the Renaissance age of discovery. Humanist descendants of this work include Thomas More's Utopia and much of Rabelais' Pantagruel.
Lucian and the Latins will attract readers interested in a wide variety of subjects: the classical tradition, the early Italian Renaissance, the origins of modern European literature, and the uses of humor and satire as instruments of cultural critique.
David Marsh is Professor of Italian, Rutgers University.
REQUEST ACCESSIBLE FILE