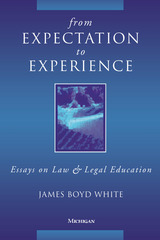 In this collection of essays, James Boyd White continues his work in the rhetorical and literary analysis of law, seeing it as a system for the creation of social meaning. White's focus is on the intellectual and ethical possibilities of law, based on the view that law is not merely a logical enterprise, nor a mere matter of politics and power, but rather an activity of the whole mind, including its imaginative and affective capacities.
The essays here are united by two basic themes. First, the essays suggest that law can usefully be regarded not only as a set of rules designed to produce results in the material world, as it usually is regarded, but also as an imaginative and intellectual activity that has as its end the claim of meaning for human experience, both individual and collective. Second, they argue that education, including in the law, works by the constant modification of expectation by experience.
White claims that as we grow, whether as individuals or as a community, we constantly shape our expectations to our experiences. This happens with particular force and clarity in the law, which seeks to create both a certain set of expectations--this is how it works as a system of regulation--and a series of occasions and methods for their revision. White's interest is in the way these understandings can affect legal teaching, practice, and criticism.
The essays in this book examine such topics as the nature of legal education; the possibilities for writing in the law for both judges and lawyers; the relation between the practice of making and claiming meaning as it works in the law and in literatures more usually though of as imaginative, such as poetry or drama; the ways in which the law talks, and ought to talk, about business corporations, religion, and individual judgments; and the ethical possibilities of the practice of law when it is conceived of as a field for the making of meaning.
From Expectation to Experience will be of interest to lawyers, legal scholars, as well as students of law, law and literature, and ethics and literature.
James Boyd White is Hart Wright Professor of Law, Professor of English, and Adjunct Professor of Classical Studies, University of Michigan.
REQUEST ACCESSIBLE FILE