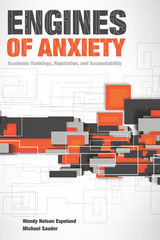 Students and the public routinely consult various published college rankings to assess the quality of colleges and universities and easily compare different schools. However, many institutions have responded to the rankings in ways that benefit neither the schools nor their students. In Engines of Anxiety, sociologists Wendy Espeland and Michael Sauder delve deep into the mechanisms of law school rankings, which have become a top priority within legal education. Based on a wealth of observational data and over 200 in-depth interviews with law students, university deans, and other administrators, they show how the scramble for high rankings has affected the missions and practices of many law schools.

Engines of Anxiety tracks how rankings, such as those published annually by the U.S. News & World Report, permeate every aspect of legal education, beginning with the admissions process. The authors find that prospective law students not only rely heavily on such rankings to evaluate school quality, but also internalize rankings as expressions of their own abilities and flaws. For example, they often view rejections from “first-tier” schools as a sign of personal failure. The rankings also affect the decisions of admissions officers, who try to balance admitting diverse classes with preserving the school’s ranking, which is dependent on factors such as the median LSAT score of the entering class. Espeland and Sauder find that law schools face pressure to admit applicants with high test scores over lower-scoring candidates who possess other favorable credentials.

Engines of Anxiety also reveals how rankings have influenced law schools’ career service departments. Because graduates’ job placements play a major role in the rankings, many institutions have shifted their career-services resources toward tracking placements, and away from counseling and network-building. In turn, law firms regularly use school rankings to recruit and screen job candidates, perpetuating a cycle in which highly ranked schools enjoy increasing prestige. As a result, the rankings create and reinforce a rigid hierarchy that penalizes lower-tier schools that do not conform to the restrictive standards used in the rankings. The authors show that as law schools compete to improve their rankings, their programs become more homogenized and less accessible to non-traditional students.

The ranking system is considered a valuable resource for learning about more than 200 law schools. Yet, Engines of Anxiety shows that the drive to increase a school’s rankings has negative consequences for students, educators, and administrators and has implications for all educational programs that are quantified in similar ways.

AUTHOR BIOGRAPHY
WENDY NELSON ESPELAND is professor of sociology at Northwestern University. MICHAEL SAUDER is associate professor of sociology at the University of Iowa.
TABLE OF CONTENTS
Contents
About the Authors
Acknowledgments
Chapter 1. The Transparency of Transparency Measures
Chapter 2. Accountability by the Numbers
Chapter 3. 0L: How Prospective Law Students Use Rankings
Chapter 4. Rankings and Admissions
Chapter 5. Rankings at the Top: Inside the Dean’s Office
Chapter 6. Career Services and Employment
Chapter 7. Rankings Everywhere
Appendix A: Methods and Data
Appendix B: U.S. News’ Methodology for Calculating Rankings, by Category
Notes
References
Index