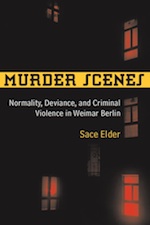 "Sace Elder has exhaustively researched both newspaper and other popular and professional treatments of murder cases and archival sources of police investigations and trials in Berlin between 1919 and 1931. Murder Scenes is an innovative and insightful exploration of the ways in which these investigations and trials, and the publicity surrounding them, reflected and shaped changing notions of normality and deviance in Weimar-era Berlin."
---Kenneth Ledford, Case Western Reserve University
Using police reports, witness statements, newspaper accounts, and professional publications, Murder Scenes examines public and private responses to homicidal violence in Berlin during the tumultuous years of the Weimar era. Criminology and police science, both of which became increasingly professionalized over the period, sought to control and contain the blurring of these boundaries but could only do so by relying on a public that was willing to participate in the project. These Weimar developments in police practice in Berlin had important implications for what Elder identifies as an emerging culture of mutual surveillance that was successful both because and in spite of the incompleteness of the system police sought to construct, a culture that in many ways anticipated the culture of denunciation in the Nazi period. In addition to historians of Weimar, modern Germany, and modern Europe, German studies and criminal justice scholars will find this book of interest.
Sace Elder is Associate Professor of History at Eastern Illinois University.
TABLE OF CONTENTS
Contents
Introduction
1. “Life has recently become cheap”: Murder, Moral Panic, and the Uncertainty of Normality
2. “The untrained gaze of the layperson”: The Murder Investigation
3. “She preferred staying with him to dying of hunger”: The Carl Grossmann Sexual Murder Case
4. “A children’s paradise”: Crime and Community in West Berlin
5. “What does Langu mean?” Solving Murder and Dissolving Community in Prenzlauer Berg
6. “A marriage no better and no worse than many others”: Domestic Homicide, Gender, and Everyday Violence
Conclusion: Violence and Normality in Weimar Germany
Notes
Bibliography
Index
REQUEST ACCESSIBLE FILE